‘It’s Enough to Drive You Crazy.’ 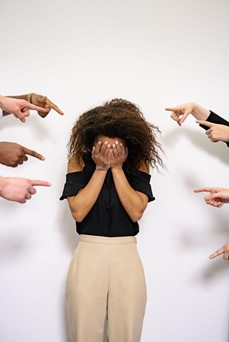 If you’ve ever heard the song by Country music legend Dolly Parton, you’ll know where this blog title comes from.

Did you know there was even a movie made named after the song, 9 to 5? Yeah, I know it sounds terrible, but it actually wasn’t a bad movie. I recommend it with a glass (or bottle depending on the week you’ve had) of your favourite beverage.

The movie portrays the ugly reality of discrimination and harassment in the workplace when three female central characters are pushed to their absolute limits by their chauvinist boss.

And, even though it was made over 40 years ago, providing you can see through all the glamour and awesome perms, it’s still surprisingly (and worryingly) relevant today.

Turn back 7 years ago, I was a little squirt who had hardly experienced any kind of prejudice. But, before long, I became a victim of discrimination by a fellow student. They constantly taunted me about my religious beliefs.

In one instance, that student turned the whole class’s attention on me and laughed. In my early teens, it felt like the end of the entire world. But, even as an adult in the workplace now, it’s easy (and far too common) to see that the feelings aren’t much different for adults who face discrimination in the workplace.

One such example happened to a close friend. Several years ago, she got a job. In the few weeks to come, she made it known to her boss she has Asperger’s Syndrome, expressing her wishes not for it to be public knowledge. Being told that wouldn’t be a problem, nothing more was said. Everything seemed to be going okay. But over time, my friend started to notice little things that made her feel uncomfortable.

The only other women employed were working in the kitchen and the cafe; the few female employees tended to be overlooked on more than several occasions. When I say overlooked, I mean that the female employees were made to do menial tasks, even if they were more than capable to do tasks that involved responsibility. Working on tills all day meant that promotions were unattainable. You could imagine it leaves you with the mortifying feeling of worthlessness or not getting anywhere.

What stood out most was that there was no support system in place to accommodate my friend’s disability. She was made to work on the tills, even though she specifically said she “really struggled” with communicating with people. Keeping that in mind, if a customer was sarcastic, she wouldn’t understand, the customer thinking that she was being rude, would go to the manager and complain about her antisocial behaviour.

With Asperger’s, it’s not unusual for a person to become upset or even angry when they don’t understand something. Having Asperger’s is hard enough to deal with in the workplace, without having to do so without the support of your manager and colleagues.

The workplace can be a very scary and frustrating place. And in an environment that doesn’t even wish to acknowledge your disability through the implementation of the relevant support systems makes it all that more potentially devastating and humiliating.

When my friend decided enough was enough, that she was going to leave and file a complaint… she had her words thrown back in her face: ‘You didn’t want anyone to know about your Asperger’s though.’ I’m happy to tell you, she has been much better off without that toxic and bigoted workplace.

Underestimating a person’s true value and potential because of your own narrow-minded understanding of the complexities of the real world is a fundamental no-no for employers.

So let’s continue to work hard together in BWi to make sure this high standard is always met.

For you, the reader: If you’re ever in this intimidating, discriminative work environment (or something similar) there are so many websites and helpful tips out there. Please don’t leave it too long. No one should have to endure discrimination and remain silent. You deserve to be highly valued and appreciated.

If you’re going through anything like this, You’re in the same boat, with a lot of your friends. But just think of these words of consolation, …the tide’s going to turn, and it’s all going to roll your way.